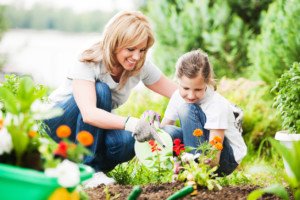 Instead, many of them look a lot like a portfolio of big technology stocks.

Companies focused on issues that the environmental, social and governance movement has come to be associated with, such as renewable energy, clean water and racial and gender diversity, are relatively underrepresented among such funds. For instance, NextEra Energy Inc. is the world’s largest operator of wind and solar farms. It wasn’t on RBC’s list of widely owned stocks in ESG funds. But big tech companies like Amazon.com and Facebook are on the list. 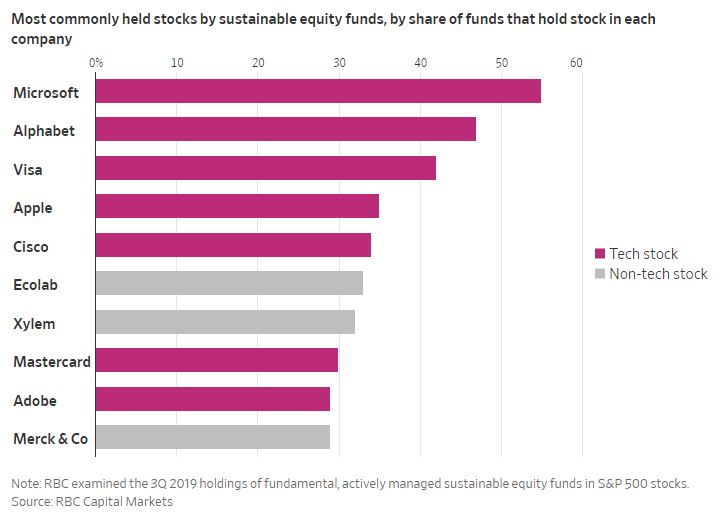 Companies focused on issues that the environmental, social and governance movement has come to be associated with, such as renewable energy, clean water and racial and gender diversity, are relatively underrepresented among such funds. For instance, NextEra Energy Inc. is the world’s largest operator of wind and solar farms. It wasn’t on RBC’s list of widely owned stocks in ESG funds. But big tech companies like Amazon.com and Facebook are on the list.

The data point to one of the biggest frustrations critics have about the world of socially conscious investing: There is no industrywide rulebook to determine what should go into ESG funds.

Some fund managers screen out all companies from a certain industry, like oil and gas, and focus on smaller, lesser-known firms at the forefront of areas like clean energy or boardroom diversity. That risks delivering returns that may drastically trail behind the broader market. So the institutions behind the biggest ESG funds often follow another playbook: They try to minimize how much their fund deviates from the broader market by creating a portfolio that, for the most part, looks like today’s technology-dominated S&P 500—just stripped of the companies with the worst ESG practices within each industry.

“These funds are often invested in stocks that don’t tell the picture of what you might think ESG does,” said Mitch Goldberg, president of investment advisory firm ClientFirst Strategy.

He added investors need to look beyond the “feel-good aspect of ESG” and understand what exactly they are buying.

And many of the tech companies that are among the most popular stocks in sustainable funds have earned high ratings across multiple elements that analysts consider in evaluating ESG practices.

Index provider MSCI Inc. gave Microsoft an “AAA” rating on ESG—the highest possible score, awarded to just 4% of companies in the software and services industry. It cited the company’s strength on privacy and data security, corporate governance, lack of corruption and instability, and clean-tech-innovation capacity.

Yet other companies often included in sustainable funds have struck investors as more controversial choices.

MSCI gave Facebook and Amazon poor ratings on privacy and data security and on labor management, respectively. The two stocks are held by a number of large sustainable funds anyway since they satisfy other criteria. For instance, Brown Advisory’s Sustainable Growth Fund excludes companies that conduct animal testing for nonmedical purposes, own fossil-fuel reserves, derive revenue from “controversial weapons,” or defy the United Nations Global Compact Principles—but doesn’t have in its prospectus any language that disqualifies companies with controversies related to user privacy or labor rights.

“What’s considered a good ESG stock is in the eyes of the index provider,” said Todd Rosenbluth, head of ETF and mutual-fund research at investment research firm CFRA.

There are more niche ESG funds out there. For instance, State Street Global Advisors’ SPDR SSGA Gender Diversity Index ETF, which trades under the ticker “SHE,” comprises shares of large companies that have at least one woman on their boards or as chief executive. Invesco’s Solar ETF exclusively holds companies in the solar-energy industry, like SolarEdge Technologies Inc. and First Solar Inc.

But such funds have attracted paltry inflows compared with ESG offerings that are more closely aligned to the S&P 500.

“It’s easy to look at an ESG ETF and see often Microsoft, Apple and other companies that any other investor might have within their traditional part of their portfolio, and then you wonder what’s the extra benefit,” Mr. Rosenbluth said.

The fact that definitions of ESG can vary so much from firm to firm has caught the eye of the Securities and Exchange Commission. The agency has sent letters to companies asking advisers how and what they determine are socially responsible investments, The Wall Street Journal reported last year.

Republican SEC Commissioner Hester Peirce has criticized not only the ESG movement but also the way that companies produce ESG ratings and scorecards—saying in a June speech that “ESG is broad enough to mean just about anything to anyone.”

So far, the lack of standardization across the sustainable-investing world hasn’t dissuaded investors from pouring money into such funds.

Sustainable funds in the U.S. pulled in a record $21 billion in 2019, according to Morningstar Inc., nearly quadrupling their net inflows from 2018.

Write to Akane Otani at akane.otani@wsj.com